A wedding in Talysh: The Struggle to Keep the Language Alive

A man in a black, no-tie suit walks towards a house surrounded by a group of men in white shirts.  Notes of traditional Azerbaijani music dissolve in the air – it’s the vağzalı,  played when a bride  leaves her parents’ house to join her future husband. The man is Farail Abbasov and he is getting married. One by one every man approaches the groom, hugs him, congratulates him, and then the dance starts.

Closer to the house women in colourful dresses are waiting for the groom. One of them takes a tray with three glasses of water and Farail has to drink one before entering the house. Then the women kisses him and dances around him. In a sign of respect, he kisses the oldest of the group.

With friends and relatives, including his nine siblings, he makes his way to the reception venue – a simple pavilion with tables and chairs – all wrapped in an ocra canvas and fuchsia ribbons.  To enter the tent he cuts a red ribbon and folk mugam starts. And with it, the dances go on until early morning hours.

Farail stops the video and says proudly that it was all in Talysh – the language spoken by the homonym community he belongs to. A resident of Badalan, a village of 2,000 people in southern Azerbaijan, the 40-year-old returned from Russia in 2015 to get married. And he wanted a wedding in Talysh – he didn’t imagine it would be the first one in the country.

In the long video the bride was nowhere to be seen – there are only men around as the festivity is strictly gender-segregated and the women celebrate separately.  In the south of Azerbaijan, where the Talysh minority lives, is known as a traditional, conservative and religious region. Women are highly isolated. Throughout the wedding the bride sits in her room and waits till the end of the celebrations. During the conversation with Farail, she neither appeared, nor her name was mentioned in front of us, as talking about the female family members with others is not accepted.

The Talysh, an Iranian ethnic group indigenous to a region spreading between Azerbaijan and Iran, are Azerbaijan’s second minority group counting on about 112,000 people, according to the 2009 census. However, the community struggles to keep alive its  language which belongs to the north-western Iranian branch of Indo-European languages and is distinct to mainstream Azeri.

“When I returned from Russia [where he worked for nine years] I realized that nobody was speaking Talysh,” he laments. “I went to the chai khana [traditional tea house], and all the youth under 25 were talking in Azerbaijani, I made the point of speaking our mother tounge with them. Sadly today, children cannot speak in Talysh.”

The assimilation has been a slow, yet unforgiving process. At the beginning of the 1990s, when Azerbaijan got independence from the dissolving Soviet Union, Talysh was widely spoken, alongside Azerbaijani and Russian. The community played a role in the independence movement and the clashes with the Soviet army claimed the lives of many Talysh.

“Back then it would just sound strange if one person in the community would not speak Talysh,” he recalls. “Of course we are all Azerbaijani citizens, but we should not forget our roots.”

The language loss is a result of various factors – the lack of media outlets, specifically television, in Talysh, and education.

“Turkish language TV channels are popular, children watch programs in Turkish and end up speaking that language better than Talysh. Also the quality of the teaching in our language at school is very poor,” maintains Abbasov.

The written language has experienced lots of changes over the last century.  Talysh is currently written with the Latin alphabet in Azerbaijan, and with a version in Perso-Arabic script in Iran. In 1929 the Soviets developed a Latin-based orthography which was replaced in 1938 by a Cyrillic-based one.

Teaching it is not a straightforward affair as Farail maintains that the Talysh language teacher in Badalan advised children not to talk in their mother language – a paradox.

“Why are you doing this, I asked him. He claims they have a Talysh accent while they are speaking in Azerbaijani.” He shakes his head in disappointment. “I said, so what, what is wrong with having an accent?”

As the wedding plans were underway, he decided that the whole event would be in his language – from the tamada, the toast at the banquet – to the songs. Such is the assimilation into Azerbaijani society that one of his sisters cried. When the villagers received the invitations in Talysh language many warned him that he could be arrested.

“I am not doing anything illegal, I simply responded.”

Abbasov says that some people think that if we talk in our language, it will lead to serious problems. “What kind of problems could it leaf out if our language will live.’’

They may have a point. Pushes for the self-determination of the Talysh have surfaced at various times. Ethnographer Paul Goble wrote that “Talysh activists in Iran and Azerbaijan have continued to call for autonomy or even independence despite the hostility to such appeals in both Baku and Tehran, but except in times of serious trouble in those two countries, the Talysh movement has largely been subsumed by larger social movements.”

“Even if some claimed for independence of this region, they did not mean to be separated from Azerbaijan, but being as an autonomous republic inside of Azerbaijan. I have not met anyone who wanted to be independent from Azerbaijan. This is our motherland, for Azerbaijanis, Lezgi, Talysh and others,” he explains, adding that the Azerbaijani constitution states that ethnic minorities have a right to preserve their language.

“But there is no interest inside the people. In our village, except me, nobody shows any interest towards it.”

His wedding was a statement in this sense.

“It was not a Talysh ceremony, rather a regular wedding just in the Talysh language. I could not invite the celebrated Talysh grandmothers.” . We did not have national costumes, they cost a lot, I could not afford them.’’

Since Farail’s Talysh wedding others followed his example, but not for long.

“The trend lasts for a few months, I haven’t heard of ceremonies in our mother tongue as of late.”

By Ilqar Valiyev, Photos and videos by Orkhan Azim 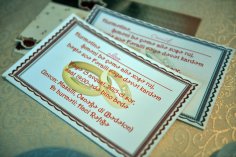